A look at Various Approaches to Biometric Face Recognition System

The biometric face recognition system has become highly advanced and it is used in various industrial sectors. Right from the law enforcement agencies to law, trade, business and commerce, the prevalence of this technology is felt more or less in every field across the world. The technology used software by means of which it identifies users with different features in their faces. In fact, it has a futuristic approach by means of which it aims to identify terrorists and criminals from the crowd by matching their faces to the biometric data in the databases.

Coming A Long Way:
Humans have always shown the innate ability to recognize faces and distinguish it from one another. Recently, computers have also shown the same ability, due to which they are used in various sectors to enhance the security. Since then the biometrics and facial recognition technology has come a long way. Even social media companies like Facebook shows interest in facial recognition. It is not surprising to know that even Google has invested a huge amount in this field. Some companies have used the facial recognition biometrics as a security measure to unlock different devices.

Different Things Measures:
The biometric face recognition system makes use of different measures to define and distinguish different individuals. Some of these factors include:

These are some of the crucial things measured in order to create a numerical code to represent the face in the database.

Even few years back, this system was mainly dependent on 2D images to capture and identify faces from the database. In order to be accurate and effective, the face needed to be looking at the camera directly while capturing the image. However, this often created a problem. In most cases, the images were not taken in a controlled environment. Even small changes in light could reduce the effectiveness of the system resulting in high level of failure. 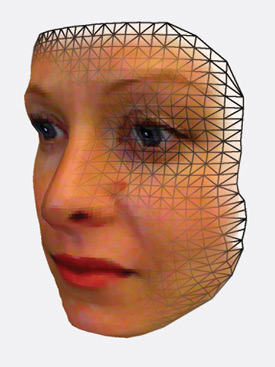 However, as technology continued to progress, a new trend emerged in the biometric face recognition system. This was in the form of 3D model, whereby it provided complete accuracy of the image. It has the potential to capture the real time 3D image of the facial surface of a person and uses distinctive features of the face. In this system, even the bones and rigid tissues are apparent and identification of the subject becomes accurate. These areas do not tend to change over time because of the uniqueness. The best part is that it is not affected by lighting and can be used even in darkness. It can recognize a subject at different viewing angles.

Considering these advancements in the technology, the biometric face recognition system is used in different sectors. Accordingly, it has offered loads of benefits in enhancing the overall security in the area of application.